Ego is an open-source, OAuth 2.0 and OpenID Connect compliant application that simplifies user management by providing methods to authenticate (establish who a user is) and authorize (establish what a user is allowed to do) users of your application through well-known social Single-Sign-On identity providers like ORCiD or Google. Ego provides stateless authorization using JSON Web Tokens (JWT) and can scale very well to a large number of users.

Ego allows users to login and authenticate themselves using the well-known and secure OAuth 2.0 protocol. Ego does not manage usernames and passwords, but instead relies on popular identity providers to complete this. Supported integrations include:

Ego also uses the OpenID Connect (OIDC) layer built on top of OAuth 2.0 to verify the identity of end users logging in from various providers and to obtain basic user profile information (such as first and last names, contact email address, etc.)

Once users are authenticated, they are granted tokens that encode permissions to access resources. Ego supports:

Secured applications can create and manage authorization tokens, and use those tokens to interact with third party applications registered in Ego to manage resource authorization. For more details on how tokens are used in Ego, see Tokens later below.

The actual permissions that can be granted are managed using Applications, Groups, or can be directly assigned to Users. To understand how these entities work together to provide authorization management, see How Ego Works later below.

Ego provides an API based on the OpenAPI specification (formerly known as the Swagger specification) which allows users (manually) and applications (programmatically) to interact with Ego's core functionality. One major benefit of Swagger-based APIs is that they also provide easy-to-use, interactive API documentation via a web interface. Users can manually interact with the API by issuing cURL commands via their terminal. Administrators with access to the Swagger UI can also interact with the API via the web interface. For more details about using the API, see here.

In addition to the comprehensive API, Ego is complemented by an administrative UI application to make user management even easier. For details on how to perform key user management tasks in the UI, see Using the Admin UI.

Once Ego has been setup, Ego resolves a user or application identity with the permissions that they have been granted, either directly or inherited through a group. Permissions are encoded in a secret authorization JWT that has a limited life. This default expiry period is configurable during Ego setup.

Downstream services (for example, a research data portal trying to determine allowed actions for a logged-in user) must make a REST call to Ego to determine the user and authority represented by a JWT, or can accept a JWT and decide from the encoded information if a user or application is allowed to take a certain action.

The diagram below shows the relationship between the entities that work together to provide authorization and permission management in Ego: 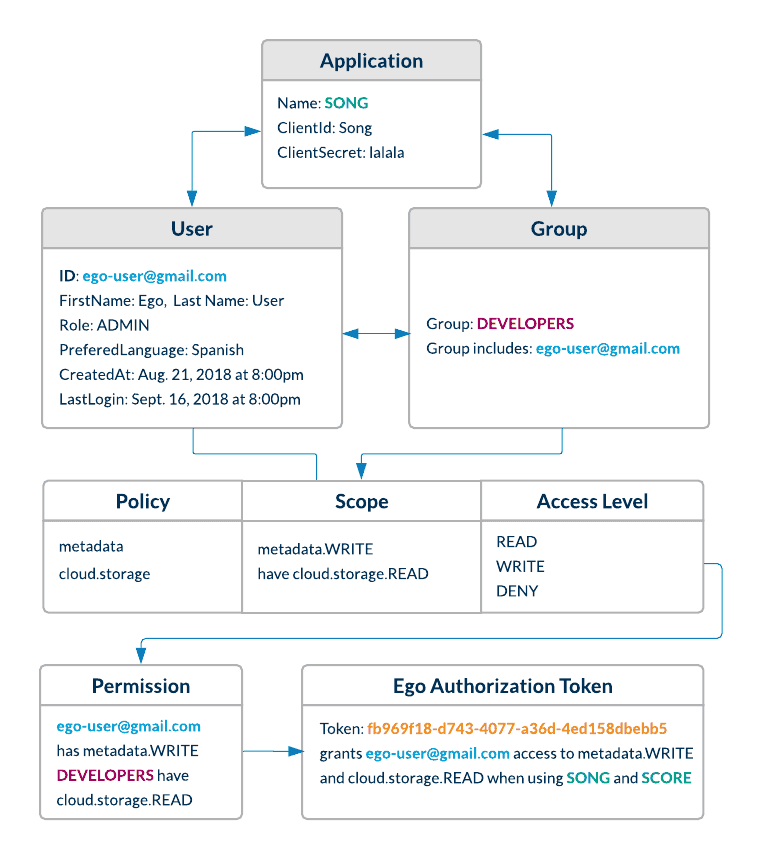 User Authentication tokens are signed JSON Web Tokens (JWT) issued when a user successfully logs into Ego using their login provider credentials. JWTs are an open, industry standard RFC 7519 method for statelessly representing claims securely between two parties, and are intended to be used as a Bearer token, passed as the Authorization header as part of any web request. Authentication establishes the identity, or who, a user is and as such authentication tokens are used to verify an application or user’s identity and contain information about the entity.

JWT data is current as of the time the token is issued, and the token is digitally signed by Ego with a publicly available signing key that applications have to use to verify that an authentication token is valid. Most of Ego’s REST endpoints require an Ego authentication token to be provided in the authorization header, in order to validate the identity before operating on data.

Application JWTs contain information about an applications's name, role (user/administrator), status, client credentials, and permissions (materialized as scopes) associated to an application. You can identify that it is an application token through the "application" block that is defined. An example of a user token issued by Ego is shown below:

User JWTs contain information about the user's name, role (user/administrator), status, and any permissions (materialized as scopes), and groups associated with their Ego account. You can identity that it is a user token through the "user" block that is defined. An example of a user token issues by Ego is shown below:

In addition to providing a user JWT, Ego can also issue a user-based API Key which can be used to verify a user’s permissions to execute on a desired scope.

An API Key is a random ID, issued by Ego to an individual user, so that they can interact with applications registered in Ego with a chosen level of authority. Each API Key is a unique secret password that is associated with a specific user, their permissions, and optionally, an allowed set of applications.

For example, a user would configure a client program (such as Song's command line client) with their API Key, and that program will subsequently operate with the level of authority associated with the API Key.